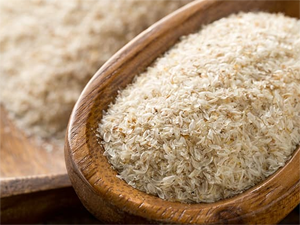 Psyllium husk contains aucubine, enzymes，fats, and mucilage and is a natural source of dietary fiber. There are 71 g of soluble fiber in 100 g of psyllium husk. When eaten, psyllium husk absorbs water in amounts up to several times its weight and becomes a gelatinous mass that adds water and volume to feces. With higher water content than other fibers, psyllium husk can soften the feces and prevent constipation.

In Europe and America, psyllium husk is commonly added to high fiber breakfasts for extra fiber. Psyllium husk can promote bowel movement and lower the risk of colon cancer and intestinal diseases. It can also reduce blood cholesterol levels, control the rise of blood sugar levels, and prevent cardiovascular disease and diabetes.

Psyllium husk is a rich source of phytosterols like beta-sitosterol and stigmasterol. Studies have shown that psyllium husk can lower total and LDL (“bad”) cholesterol, helping to reduce heart disease risk.

The high fiber content of psyllium husk also aids weight control. In the stomach, it expands and forms a gel-like consistency when it absorbs the water one drinks. Besides taking up more space, it delays the rate at which food leaves the stomach. This makes one feel full longer, thus helping to curb appetite.

Polysaccharides – How Mushrooms can Improve Your Immune System